I was born and raised in Western MA and grew up in the quaint town of Agawam. I had a great childhood and always enjoyed music and singing along to my favorite songs. We had a piano in the house and my mom played an sang often. I always loved the piano and although I can play a few songs, I was never very good at it.

My father was a trombone player and my grandfather was a tenor banjo player. My mom thought it would be nice if I played banjo too and I took lessons one summer but never bought the banjo bug. My sister & brother both played acoustic guitar and sang and my sister taught me a few chords and I began to teach myself the rest.

After graduations high school, I enlisted in the USMC and was shipped off to Paris Island, SC to begin boot camp. When I was about 15 years old I found myself having breathing issues when I would exercise but didn’t think much of it. It wasn’t until about 43 days into boot camp that I was diagnosed with asthma. Although I’m sure I could continue with the correct medication, they informed me that if I were in combat, had an asthma attack and couldn’t get to my medication, I could put my fellow Marines in harms way. With that devastating news, I was honorably discharged for medical reasons.

Upon my discharge, I had no idea what I was going to do as my life’s plan had completely changed. When I left Paris Island, I took a bus to Florida to visit my grandparents and father. There, with my USMC pay, I bought a used Ovation guitar and immersed myself into it. After a few weeks in Florida, with my guitar in hand and shaved head, I came back to Massachusetts, got a job at a convenience store and enrolled in a local community college majoring in music. 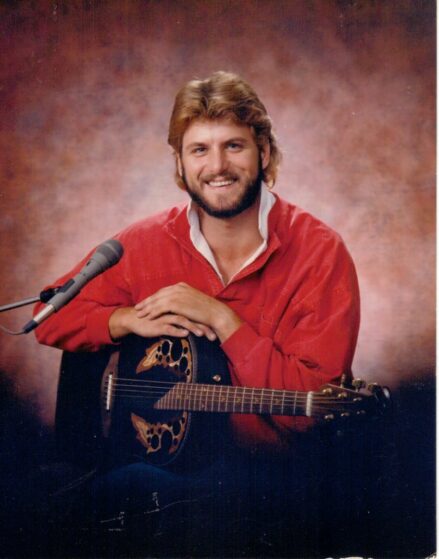 I would often go to open mics at Theodors in Springfield where I honed my skill and tried to combat my stage fright. I also answered an ad in the local paper looking for a singer / guitarist to complete a trio. My first paying gig was with that Trio, “The Mix” and from that point on, I was hooked.

During that time I also started singing at wedding ceremonies and restaurants and was the antithesis of a “starving musician”. I realistically knew from the start that the chances of stardom were very slim but I did feel that I could make a living doing what I loved. However, having just started out, money was always tight and the little money I did earn, always seems to be reinvested in new equipment. For the next few years I continued performing while I worked several different menial “day jobs”.

After performing for a few years and getting more experience, I was offered job installing miles of natural gas pipeline. This was a union job and came with great benefits and pay. I worked Monday through Saturday from 6am to 6pm along with an hour commute each way. During this time I was also playing gigs on Friday and Saturday nights. Sunday was a day of sleep to say the least. After the gas pipeline job was finish, I worked repairing and installing guardrail throughout the state for another few years. I left that job in 1991 to work construction at Bondie’s Island building the trash incinerator. Even though they were all union jobs with great pay & benefits, to me it was unfulfilling and after another 6 months of back breaking work, I quit that job and never looked back.

I was officially self-employed!

During that time, a friend and fellow soloist who I admired very much had mentioned that he was going to DJ a wedding. I was shocked to say the least as we were musicians and not DJs! He explained to me that although live bands were great, they also had their limitations on what songs they could play, they would take two to three breaks during the event leaving guests without music to dance to and for many couples, were too expensive. I quickly saw the potential in expanding into the DJ business but always included some live music for a portion of the event. Typically for the dinner hour and for weddings, the wedding ceremony.

Having performed at wedding ceremonies for many years I slowly began delving into the DJ aspect of the wedding business. Putting together the required equipment was the first thing I needed to do but 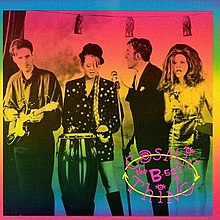 by far the biggest challenge was acquiring the songs (CDs) to cover every request. Fortunately, I already had an extensive CD library and quickly began expanding on that. Long before iTunes and other streaming services were available, the way to get your songs was to go to the music store and buy the CD. Often, I would look for compilation CDs so I could get more popular songs on one CD. Unfortunately, sometimes this wasn’t possible.   I distinctly remember having to buy the B52’s “Cosmic Thing” CD for over $25 so I could have one song, the new hit everyone was requesting,”Love Shack”.

After performing several events such as “Jack & Jills” and holiday parties, I began DJing weddings. Things went well and I learned quickly but looking back at it now, I must admit, I was very inexperienced and did make my fair share of mistakes but did quickly learn from them and with every passing year, developed ways to make things run as smooth as possible. With any job that one does, after years of doing the same job, it becomes second nature and you instinctively know what to do. Also, with experience comes confidence and being comfortable speaking and performing in front of large crowds.

In 1992, I was blessed with the birth of identical twin daughters Natalie Rose and Danielle Renee. Fatherhood was my calling and have always been and continue to be very much in their lives. Early on I discovered that Natalie and Danielle had great voices and could sing very well. Quite often, I would bring them with me to my shows at nursing homes and retirement communities and have them come up and sing with me. We sang many songs together but one that I’ll always cherish is the song ” ‘A’ You’re adorable”. I’m very grateful we recorded that song in 1998. 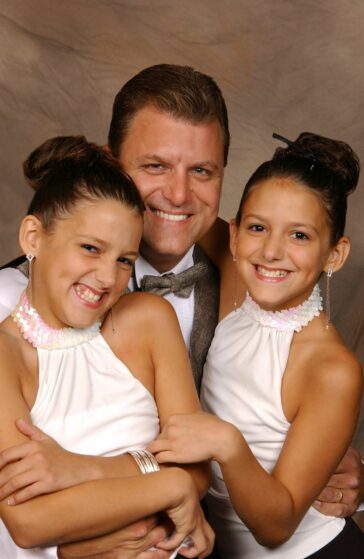 Although they both sang beautifully alone, whenever the girls sang together, Natalie would most often sing the lead vocals while Danielle had an incredible knack for singing harmonies.

Danielle studied nursing is currently working locally as an RN, while Natalie studied child psychology and became a licensed social worker working for many years with autistic children and then with foster children. In 2020, Natalie decided she needed a change and gave her resignation to take time and rethink her future. While she did that, I suggested that she come sing with me. Natalie now sings full time with me as “Gary & Natalie Jones (father & daughter duo). Natalie began writing songs at a young age and to date, has written about 25 songs and has recorded some of them in a professional studio for release in the near future. We plan on implementing them into our show very soon.

In 2011 I DJ’d a wedding where the couple had hired a photobooth for their wedding reception. I saw just how much fun the guests had at the photobooth and it intrigued me. I presented the idea to Natalie and Danielle and they loved the idea. Especially given the fact that they would be the photobooth technicians 🙂 I quickly immersed myself into the world of photobooths and was amazed at the different style, options and possibilities. 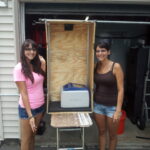 Nat & Dan with the shell

I actually built my first photobooth in my driveway and used that for several years until retiring it for my current Fotomaster Mirror Me Booth (A full-length mirror that comes to life when you touch it).

As you can see, the process of the photobooth was a labor of love and I was very proud of the finished product.